The largest PET recycling plant in the country is now up and running and will substantially reduce Australia’s plastic waste by recycling the equivalent of around 1 billion PET beverage bottles each year.

A world-class facility, the plant is helping to build a domestic circular economy, increasing the amount of locally sourced and recycled PET in Australia by two thirds, from around 30,000 tonnes to over 50,000 tonnes per annum.

During its construction and installation, the plant supported around 225 jobs and now employs 40 people – mostly Albury-Wodonga locals – for its 24/7 operations.

Contributing to closing the loop on PET recycling, the site will recycle 30,000 tonnes of PET each year, converting it to raw material that can be used to produce new beverage bottles plus other food and beverage packaging in Australia.

Further important environmental benefits will be delivered by the plant, including reducing Australia’s reliance on virgin plastic and recycled plastic imports. Solar energy is used to power part of the facility, and a water treatment unit and rainwater tanks will reuse and recycle as much water on site as possible.

Federal Minister for the Environment, the Hon. Sussan Ley MP, NSW Minister for Environment and Heritage, the Hon. James Griffin MP, and the Mayor of Albury City, Cr Kylie King, officially opened the facility, which is located at the Nexus Precinct, 10km north of Albury-Wodonga’s CBD in NSW.

The plant was constructed using the knowledge and expertise of each member of the joint venture, which is trading as Circular Plastics Australia (PET). Cleanaway will provide the plastic to be recycled through its collection and sorting network, Pact will operate the facility and provide technical and packaging expertise, while Asahi Beverages, CCEP and Pact will buy the recycled plastic from the facility to use in their packaging. 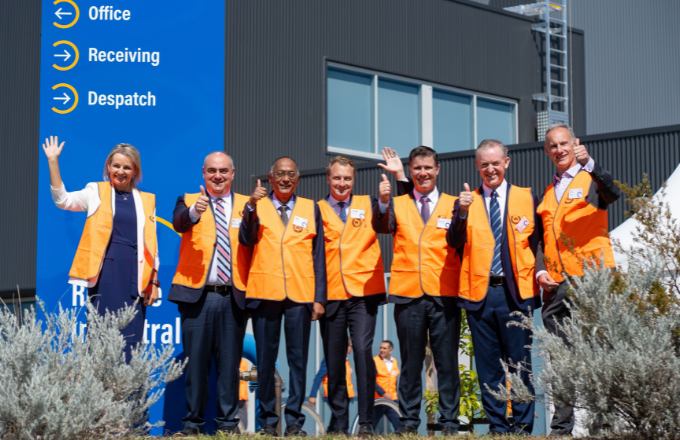 The joint venture is building a second PET plastic recycling facility in Melbourne’s west which will also have the capacity to recycle the equivalent to around 1 billion PET beverage bottles each year. Construction on the $50 million plant is scheduled to begin in April 2022 and be completed in 2023.

The Albury-Wodonga project was supported with about $5 million from the NSW Government’s Waste Less, Recycle More initiative, with the support of the Australian Government’s Recycling Modernisation Fund.

Federal Minister for the Environment Sussan Ley MP said that as Australian works internationally and domestically to reduce plastic waste it is wonderful to see practical action and commitment coming to fruition.

“Pact Group made a $500 million commitment at our first national plastic summit in 2020 and they, along with their JV partners Cleanaway, Asahi Beverages and Coca-Cola Europacific Partners, have made that a reality today. This demonstrates commitment to our national packaging targets when the supply chain and government work together,” Minister Ley said.

NSW Environment Minister James Griffin said: “Through our $337 million Waste Less, Recycle More initiative, the NSW Government contributed $4.8 million to this facility, and another $495,000 for specialised equipment inside the plant. This investment is helping us achieve our target of tripling plastics recycling in NSW by 2030, and transitioning to a circular economy.”

Pact’s Managing Director and CEO, Sanjay Dayal, said: “The opening of this state-of-the-art facility in Albury-Wodonga is a game changer for Australia’s plastic recycling industry. We are proud to be part of a sustainable solution to divert plastic waste from landfill and ensure we are recycling and manufacturing our drink bottles and food packaging here in Australia without the need to import plastic material from overseas. Pact Group will continue to work with industry partners and governments to build a strong, local circular economy.”

Cleanaway’s CFO, Paul Binfield, said: “This bottle-to-bottle plastic recycling facility brings the circular economy on-shore to Australia giving everyone a chance to participate in making a sustainable future possible by recycling their bottles and buying beverages in recycled plastic packaging. Together with our partners, Cleanaway is working on a network of plastics recycling facilities integrated with our leading collection and sorting infrastructure to provide our customers with the most sustainable and circular solution for their plastic recycling.”

While competitors in the beverage market, CCEP and Asahi Beverages have come together for this joint venture to deliver a significant increase in the volume of PET plastics recycled in Australia.

Asahi Beverages’ Group CEO, Robert Iervasi, said: “This recycling plant is a testament to the sustainability commitment of each organisation involved. It can’t be underestimated how significant this project will be – we are providing an industry-wide solution that will benefit all Australians. Asahi Beverages already has a large beverage manufacturing plant in Albury, and we are excited to expand our presence, helping create more local jobs. Our consumers told us they wanted more recycled bottles, and together we have worked out a way to do that that will make a real impact.”

Coca-Cola Europacific Partners’ Vice President and General Manager Australia, Pacific and Indonesia, Peter West, said: “CCEP is committed to playing a leading role in Australia’s circular economy. With our partners, we are working towards creating a closed loop for our bottles where they are used, collected and given another life. This plant, and the future Victorian plant, will complete this loop, help to solve the national rPET shortage and create new jobs for Australian workers. It is a proud moment in our corporate history.”